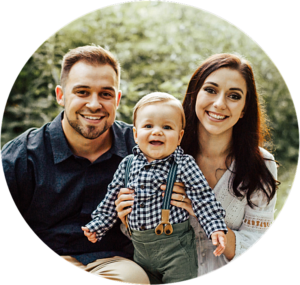 Dominic was born in a small town in upstate New York on March 16, 1995, and received Jesus Christ as Savior when he was seven years old.  In May 2017, Dominic graduated from Pensacola Christian College with a bachelor’s degree in Missions Ministry. That June, Dominic began his ministry at Cornerstone Baptist Church as Missionary Pastor and in August of the next year married his wife Jackie. They have a one year old son and a daughter on the way. In November of 2020 121 Capitol Connection became a 501(c)(3) not for profit organization. Pastor Dom now operates within this organization as a full time missionary to the Michigan State Capitol.

Pastor Dom makes weekly visits to Lansing where he walks the hallways visiting offices with the purpose of introducing 121 Capitol Connection and praying with those in the office. He also meets frequently with familiar legislators to develop those relationships, takes staff and legislators to lunch, participates in the legislative Bible study when invited, encourages our Christian legislators, and strives to lead the connections God has given him to Jesus in whatever way he can! Pastor Dom also leads a group from his home church, Cornerstone Baptist in Swartz Creek, once a month to visit with their state legislators. This ministry has led to souls being saved and many Christians being encouraged!

In addition to time spent in Lansing, Pastor Dom spends time networking with other pastors around Michigan, promoting 121 Capitol Connection to pastors and faith groups, and raising financial support from churches and like-minded organizations.